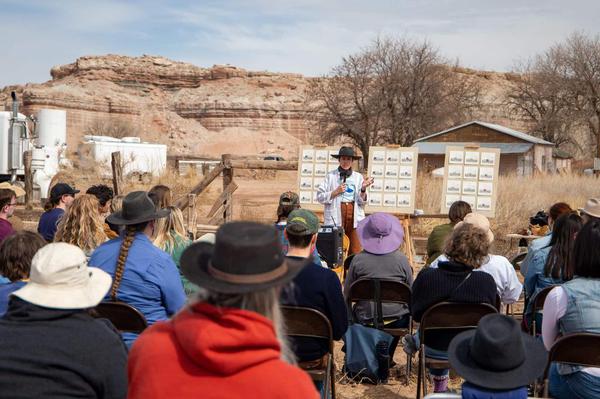 Utah is home to an art scene that stretches across the state, with subversive art pockets in unlikely places, but sometimes, Salt Lake City’s presence eclipses work and communities in smaller towns. Just outside of Moab is one such unassuming town, sandwiched between the prismatic Book Cliffs and the dusty railroad tracks—Green River. With a population of just under 1,000, Green River hosts the arts organization Epicenter, whose founders worked in Green River as AmeriCorps volunteers. 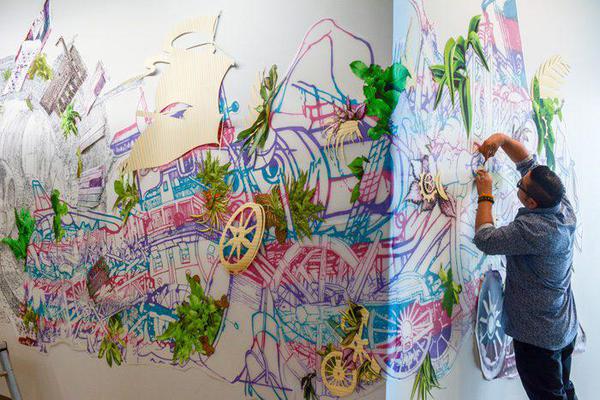 Like colorful ensos or organic ouroboros unfurling around black centers, David Rios Ferreira’s collages are circular and dynamic forms, what he calls “imagined gateways, objects through which we may connect with those we cannot reach on this plane.” Accompanied by writing, photographs, and video by Denae Shanidiin. a Diné and Korean artist and the director of MMIWhoismissing, the exhibition Transcending Time and Space at the Utah Museum of Fine Arts in Salt Lake City is the pair’s multimedia collaboration inspired by missing and murdered Indigenous people. 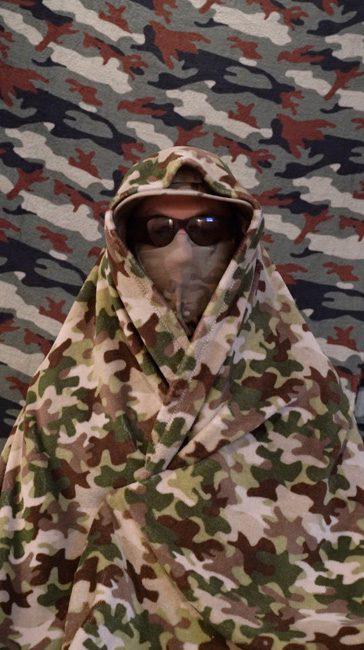 Review: Jesse Meredith: So That We May Fear Not at Finch Lane

In So That We May Fear Not at Finch Lane Gallery in Salt Lake City, photographer Jesse Meredith documents an American militia group and illustrates contradictory narratives of maleness and patriotism. 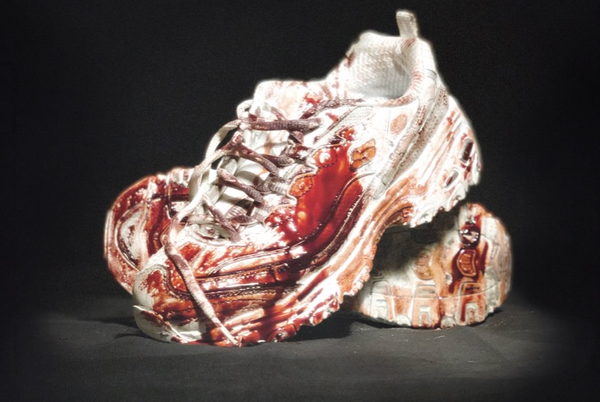 Featuring crisp, aesthetic shots and chilly synths, The Runner by Boy Harsher is part horror, part ’80s music video and part meta-documentary. Harsher uses the genre-bending approach to place viewers in an uneasy space where the camera doesn’t delineate realities—in one scene, the shot moves from a person watching a music video to being inside the TV’s picture. 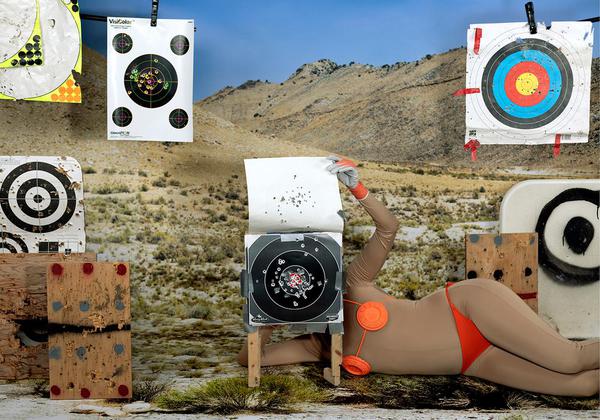 For those who haven’t wandered into the brittle kaleidoscope of the cracked Southwestern desert, there are, unfortunately, pockets of polluted and vandalized sites littered with shotgun shells, beer cans and rotting furniture. There are parcels of delicate desert put on the auction block for oil and gas drilling. But what the exhibit Land Body at Ogden Contemporary Arts explores is an issue that is not a set pattern, but something we as a community can recognize and change. 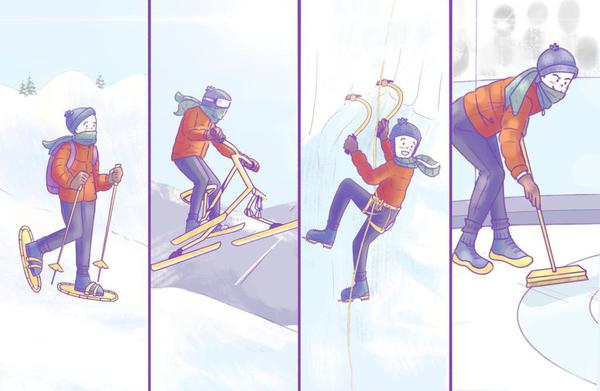 Bradley began mountaineering guiding on Denali and has been with UMA since 1994. He supervises a host of world-class ice climbing guides. These friendly guides provide beginners with a solid foundation and plenty of fun. “In a UMA class, a ‘rookie’ ice climber can follow a guide up or top-rope an ice formation and have fun becoming a novice ice climber,” says Bradley. You don’t need to be seasoned in mountaineering to have a good time. Ice climbing requires an average level of strength and fitn 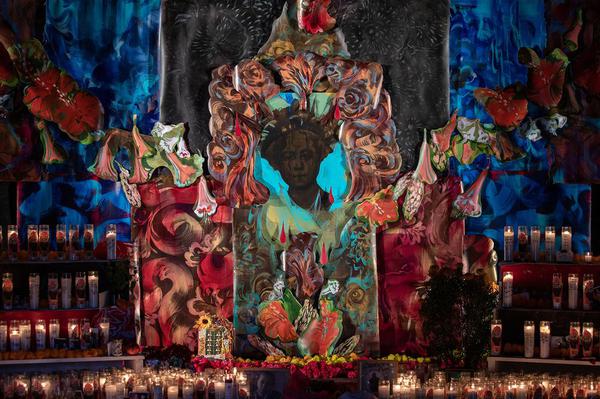 A face mask on a POC worker, a crying Statue of Liberty, a woman walking through hurricane debris: Vida, Muerte, Justicia / Life, Death, Justice swirls into your mind in a post-pandemic fog. The timely, powerful group show at Ogden Contemporary Arts, on display through Nov. 27, centers on the COVID-19 pandemic through the eyes of an all-Latin American/Latinx artist and curatorial lineup. 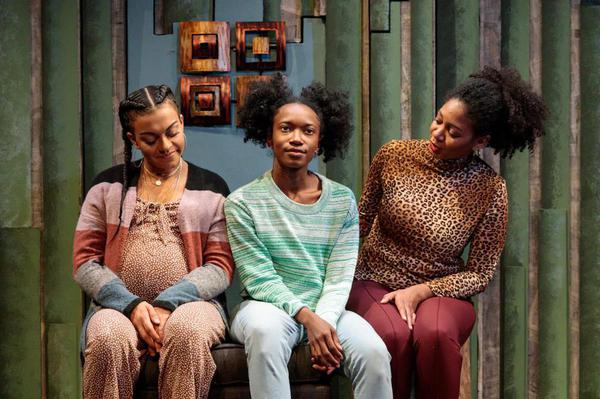 The lights go on, the curtains part and the stage floods with sound—the experience of live theater is brighter than ever before. A spotlight is on the Utah theater scene, with local playwrights and performers eager to step onstage for an expanding audience in several new venues. Award-winning and veteran storytellers at the Salt Lake Acting Company and Plan-B Theatre Company reflect on the human experience and shed light on important social topics. The Off Broadway Theatre helps audiences laugh their troubles away with witty parodies and live improv. The Hale Centre Theatre, meanwhile, serves big and beloved Broadway hits like Les Misérables and Guys and Dolls for fans of all ages. These four theaters showcase the diverse magic of the local theater scene with a uniquely Utah flavor. 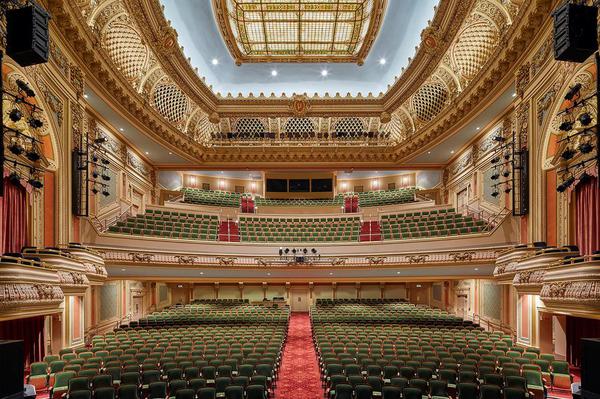 What if I told you that you could buy one of the most opulent, historic theatres in the country—built in 1918 and containing a pristine Tiffany skylight, intricate chandeliers and other unique architectural features—for $0? The theater in question is located in downtown Salt Lake City, but unfortunately, the opportunity to buy and renovate the Utah Pantages Theatre was not given to the public or even the wider real estate developer community in general, says Michael Valentine... 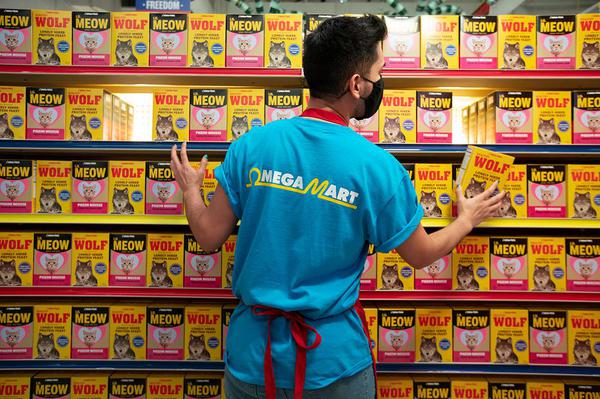 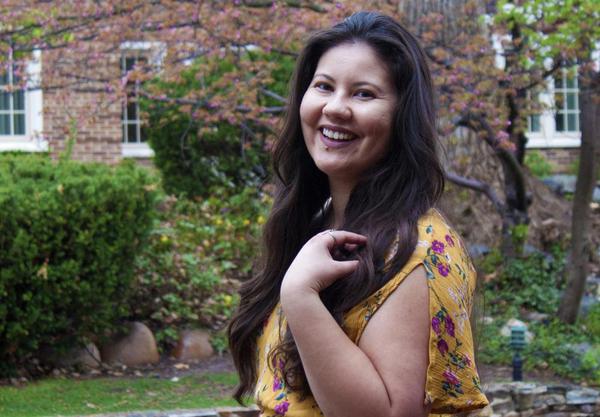 Sarah May Uncovers Her Heritage in Photographic Layers

When photographer and community advocate Sarah May began learning more about her indigenous, Salvadoran heritage five years ago, it pulled her into a creative dialogue with her roots and helped her claim a deeper relationship with a culture she’s distanced from but still feels an intense connection to. “There is generational heritage that’s been passed down, and part of these people is still living in you. When I create my art, I’m thinking about my relationship with my ancestors,” says May. 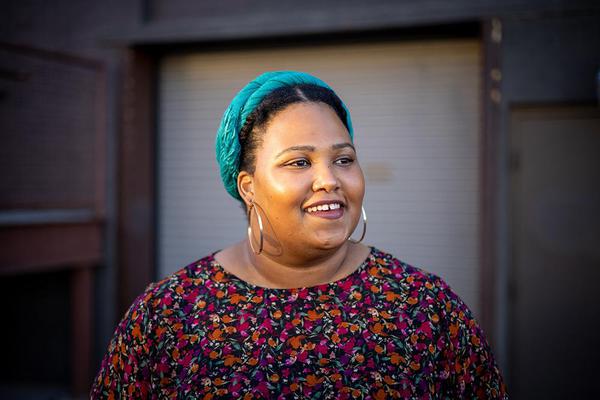 If you asked a room of people to list the traits of a leader, chances are you would hear responses that reflect society’s perpetuated myth of a militant hero—a trend Ruth Ben-Ghiat describes in Strongmen: Mussolini to the Present. But the reality is that these “leaders” often break more than they fix, and the aftermath of their reigns are cleaned up by the real powerhouses of our communities: the people who provide medical, nutritional or emotional care. Ashley Finley, Co-Founder of the Black Li 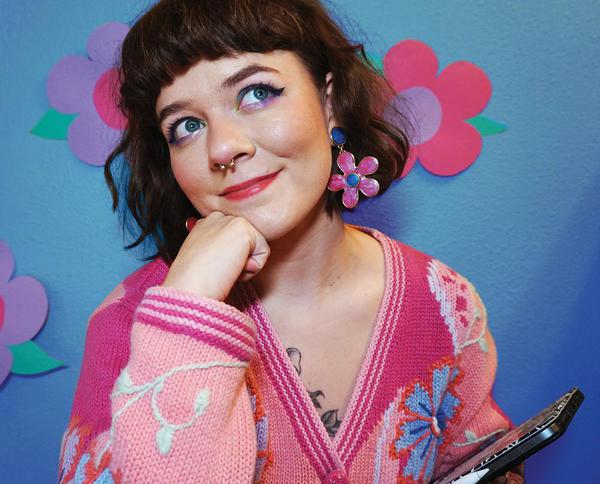 Getting in the right mood to talk about Mirmsy’s (aka Miriam Barse) art involves borrowing a line from the cartoon cult classic Adventure Time: “C’mon, grab your friends!” Let’s frolic in the upbeat pastels and pop-culture puns that make up the loveable and unique artistry of Mirmsy. Web and graphic designer, jewelry and upcycled clothing maker, and overall jack-of-all-trades, Mirmsy’s wares are the stuff of Instagram impulse buys and unstoppable late-night giggling. 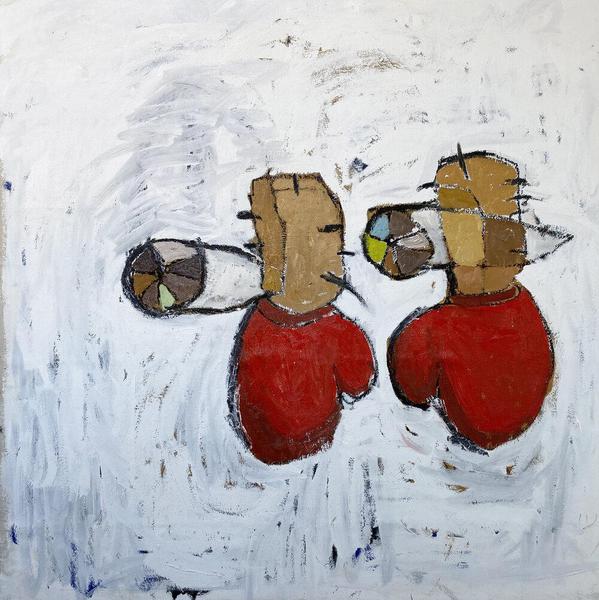 Andrew Alba Paints from the Gut in “American Soup”

If you’re being followed or navigating a dangerous place, your natural defense mechanisms activate and start tuning. These mechanisms are buried in our mind and body, just as they are in any other domesticated animal. Colors get brighter, movements slow down, and you can shift from terror to fighting mode in a fraction of a second. This is the realm of instinct, where your gut determines if you’re going to run or throw punches — and where painter Andrew Alba reports from, depicting the intense side of Utah in works like “Stray Pregnant Dog in Glendale,” “Running,” or “Rose Park Pozole.” In his latest show, American Soup at Modern West Fine Art, Alba weaves bright red paint, aggressive lines and the symbolism of half-feral animals to depict a world of migrants, laborers, worried women, fighters and other members of marginalized communities. 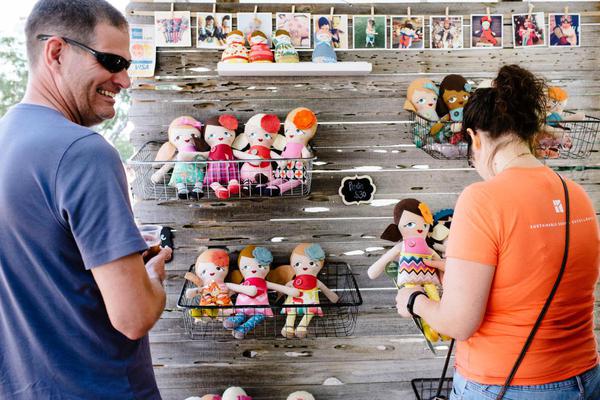 In 2009, the first Craft Lake City DIY Festival launched with the mission to educate, promote and inspire local artisans while elevating the creative culture of the Utah arts community through science, technology and art. Craft Lake City does this by showcasing locals with exceptional technical skill and promoting regional spending through creative commerce in Utah. Eleven years later, craft fairs and farmers’ markets are now as “Salt Lake City” as mountain views... 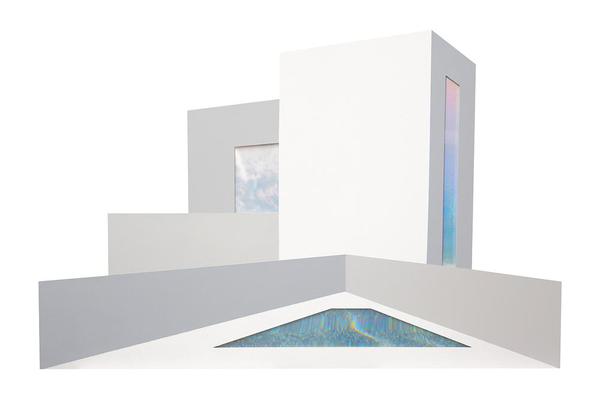 Long before the invention of cameras or computers, paintings and drawings were the only type of “virtual” reality people experienced. While gazing into a work of art, a viewer was transported into a new, imaginary world designed by an artist, with specific goals in mind, to manipulate the senses and produce emotional effects. 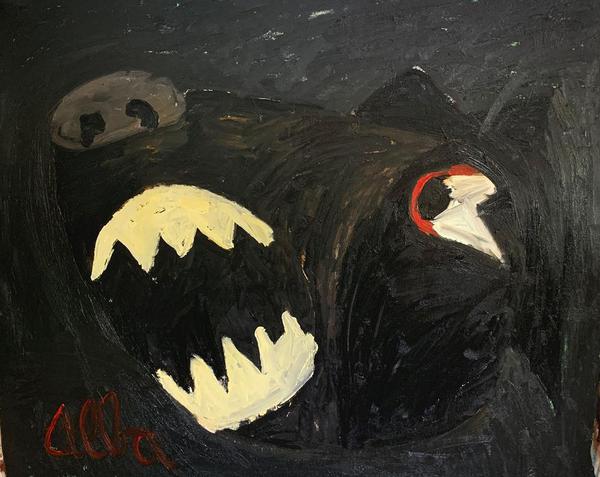 Outrage as Righteousness in Andrew Alba's Show Everyone Sucios

2020 has been one of the most widespread experiences of shared trauma in living memory. Every community has experienced a portion of the anxiety and pain, but not equally. The shared experience of the pandemic and recession has given people and institutions long segregated into comfortably distinct worlds a common denominator—and it’s forcing us to witness the impact of disasters on poor communities, especially those of color. 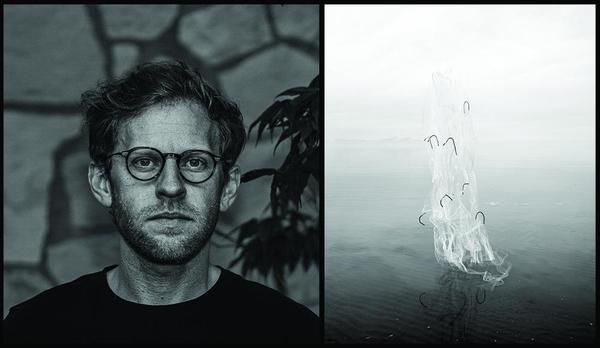 Gritty, dark and suffused with a subtle, surreal humor, Levi Jackson’s photographs play on the illusions operating in the Western American landscape and culture. From a black-and-white image of the ground stamped with the phrase “My Name Is Mud” (Untitled, 2014) to a series of photos featuring livestock decoys and other objects wrapped in fabric (including Ms. September, 2014 and Hey, Pilgrim, 2019), Jackson isn’t shy to intrigue viewers with simple but perplexing combinations of objects and med 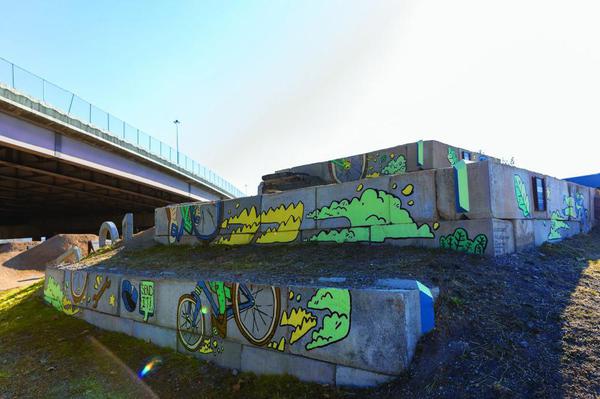 With the disruption to everyday routine caused by the outbreak of COVID-19 and the heavy-heartedness we feel at the loss of our everyday lifestyles, we have to look for ways to work against the coronavirus blues. Looking at an interesting piece of art or talking to a neighbor is a good place to start, according to Kat Nix, Public Art Program Manager at the Salt Lake City Arts Council. The council provides funding and resources for community art projects. The organization is responding to the “St

Premiering at Salt Lake City’s Grand Theatre on March 26, the upcoming production of Oscar and Emmy winner Aaron Sorkin’s stage version of To Kill a Mockingbird is a happy ending to a long story of legal struggles to present the play to Utah audiences. The new version, currently running on Broadway, differs significantly from both the 1962 film and the 1990 stage version.
Load More Articles
Close ✕